This appeared in the February 24, 2006 USA Today. This was before the Kindle or Nook had appeared, and prototype e-readers were barely hitting the market. 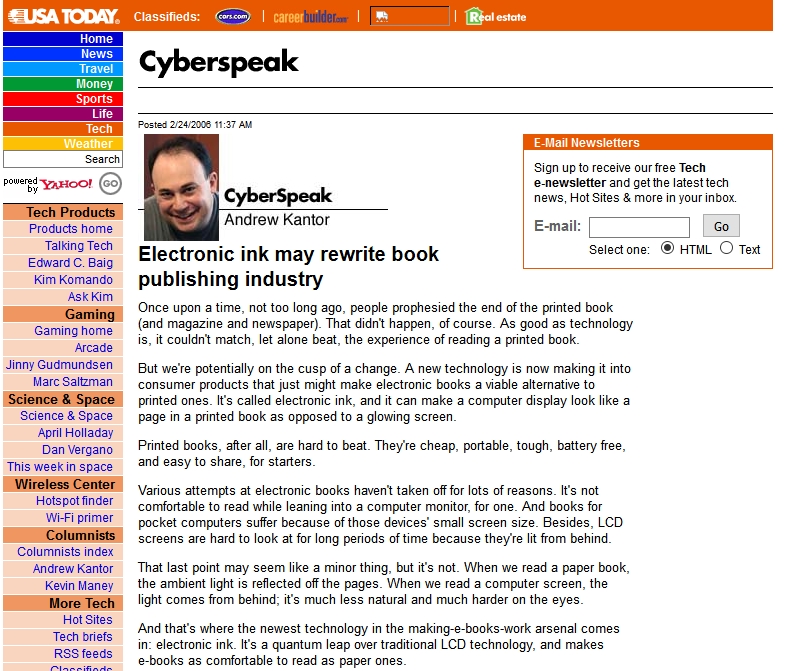 Once upon a time, not too long ago, people prophesied the end of the printed book (and magazine and newspaper). That didn’t happen, of course. As good as technology is, it couldn’t match, let alone beat, the experience of reading a printed book.

But we’re potentially on the cusp of a change. A new technology is now making it into consumer products that just might make electronic books a viable alternative to printed ones. It’s called electronic ink, and it can make a computer display look like a page in a printed book as opposed to a glowing screen.

Printed books, after all, are hard to beat. They’re cheap, portable, tough, battery free, and easy to share, for starters.

Various attempts at electronic books haven’t taken off for lots of reasons. It’s not comfortable to read while leaning into a computer monitor, for one. And books for pocket computers suffer because of those devices’ small screen size. Besides, LCD screens are hard to look at for long periods of time because they’re lit from behind.

That last point may seem like a minor thing, but it’s not. When we read a paper book, the ambient light is reflected off the pages. When we read a computer screen, the light comes from behind; it’s much less natural and much harder on the eyes.

And that’s where the newest technology in the making-e-books-work arsenal comes in: electronic ink. It’s a quantum leap over traditional LCD technology, and makes e-books as comfortable to read as paper ones.

There are essentially two kinds of LCDs. There are the simple ones that display the same information over and over — the digits on a watch or the icons on a display for example. Then there are the more powerful LCDs you find in computer monitors that display hi-resolution images.

The former use reflected light, like a paper book, but aren’t suited to crisp, clear, ever-changing type. The latter can display hi-resolution type, but have to be lit from behind.

Further, while an LCD needs to be powered continuously, e-ink doesn’t. Just as the flash memory card in your camera keeps its contents without a battery, electronic ink only requires a current to change the display.

E Ink’s technology debuted in early 2004 with Sony’s Librie , an e-book reader not sold in the U.S.

E Ink and Sony worked together on it, and developing the Librie allowed the companies to get the technology mature enough that it was commercially viable, according to Darren Bischoff, E Ink’s senior marketing manager.

The Librie was the pioneer, and, Bischoff explained, other companies saw it and realized the potential.

Sony is about to release its next generation e-book reader, the Portable Reader System , the PRS-500, in April. Unlike the Librie, it’s not locked into Sony’s proprietary e-book format; it can also read PDF books.

iRex Technologies , a spinoff from Philips, is working on a larger-format e-book reader called the iLiad that’s designed more for newspaper-like content. And Jinke Electronics in China is creating a Linux-based reader. These are just the initial products. If e-books catch on, they’re but the tip of the iceberg. And there’s a lot to like.

E-books are a boon for publishers. While the cost of the content (author, editors, layout artists) remains the same, the cost of production and delivery obviously drops significantly. There’s no paper to buy, no shipping charges to pay, no worries about how big a production run should be.

When they sell you a book, they can easily include, say, 10 pages each from other titles you might like. And they could offer long excerpts of all their titles to bookstores (or whomever sells them) so customers can “browse.”

E-books are a boon to authors as well. For one, self-publishing just got easy, and a self-published book can look as good as a professional one. They also allow publishers to take a chance on unknown writers because of the lower cost of production.

All this in mind, the ripple effects are going to be interesting. If e-books get popular, brick-and-mortar bookstores will have to focus on the browsing experience, because that’s something they can do better than any website.

The future of online bookstores, though, gets cloudy. Publishers will be able to sell directly, so why pay a cut to Amazon.com or Barnes and Noble?

Or, rather, why limit who can sell your books at all? Why not let anyone be a reseller, the way Amazon does with its Associates program? If books are electronic, there’s no limit to who can offer them. Maybe publishers will give a small cut of their sales to any online directory that hawks their wares.

Everyone could become a bookstore, so where you shopped would depend on who you wanted to get a commission from the sale. Your local church or temple could put a book store on its website and ask members to use it.

The education-market implications are staggering. High school kids could see bulging backpacks disappear, replaced with downloaded electronic versions. In fact, with no printing costs to pay for, schools could pay less for more up-to-date texts, and use the money saved to provide e-book readers for students.

For the college market, there’s a different issue: resale. It’s a huge market, so e-books will need some mechanism to allow them to be transferred to a new owner. Before MP3s got popular, you could lend a CD you liked to a friend. Once the physical media became less important, though, the whole issue of copying and copyright reared its ugly head.

To prevent that mess from moving into the book industry, publishers need to work out a way to allow people to lend, give, or sell their books. If the format is completely locked down, the industry will be stillborn. (Like it or not, digital music got popular because of the ease of sharing, even if it wasn’t legal. ITunes wouldn’t be possible without Napster.)

A standard — and open — file format would be a good start; today there are competing “standards” from Adobe, Microsoft, Mobipocket (probably the most popular), Palm, and Sony. Whatever format emerges as the winner will have to let me treat an e-book like a print one, making it free and easy to transfer ownership. If the publishers and the hardware and software vendors can get their act together, this market has a chance.

Will it replace printed books? Not for a long time, if ever. But is it a viable and profitable alternative? You bet.