This appeared in the January 19, 2007 issue of USA Today. MP3s were around, but the concept of storing your content online — let alone having your entire music library there — was unheard of. 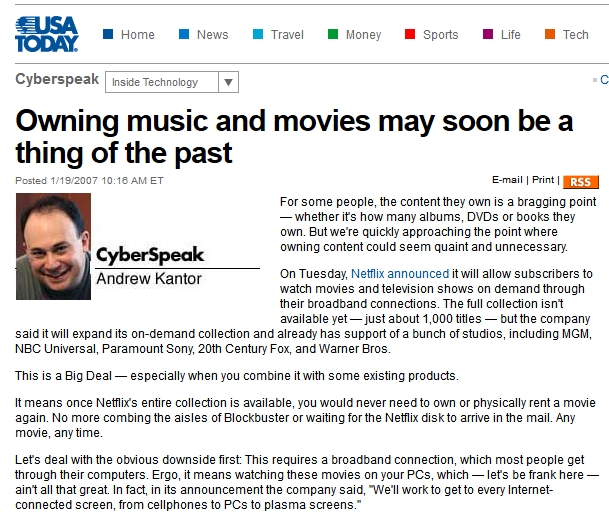 For some people, the content they own is a bragging point — whether it’s how many albums, DVDs or books they own. But we’re quickly approaching the point where owning content could seem quaint and unnecessary.

On Tuesday, Netflix announced it will allow subscribers to watch movies and television shows on demand through their broadband connections. The full collection isn’t available yet — just about 1,000 titles — but the company said it will expand its on-demand collection and already has support of a bunch of studios, including MGM, NBC Universal, Paramount Sony, 20th Century Fox, and Warner Bros.

This is a Big Deal — especially when you combine it with some existing products.

It means once Netflix’s entire collection is available, you would never need to own or physically rent a movie again. No more combing the aisles of Blockbuster or waiting for the Netflix disk to arrive in the mail. Any movie, any time.

Let’s deal with the obvious downside first: This requires a broadband connection, which most people get through their computers. Ergo, it means watching these movies on your PCs, which — let’s be frank here — ain’t all that great. In fact, in its announcement the company said, “We’ll work to get to every Internet-connected screen, from cellphones to PCs to plasma screens.”

But computers that connect to televisions are out there. Microsoft’s Windows Media Center Edition, for example, was designed to let you watch and record television through your computer, but it also works the other way — lets you watch what’s on your computer, on your TV. In other words, it’s not a major step to watch Netflix on demand for your TV. In fact, in September 2004 Netflix and TiVo announced they were working together, and although that partnership has languished this might a catalyst to get things moving again.

From a business point of view, delivery by wire is a great idea for Netflix. The capital investment might be high, but if this new program ever supplants its disk-by-mail service, it would be a huge savings. No more having to buy or burn hundreds or thousands of copies of the same movie. No more postage. No more paying folks to sort through bins of movies. Instead, its investment would be in storage space (cheap), bandwidth (cheap), and a distributed network (so someone in New York doesn’t have to get his movie from a server in California).

From a consumer point of view, it’s the shape of things to come. In the music world, it’s already been around for some time.

When you think of downloading music, two things come to mind: pirated music and iTunes. They are, after all, the number one and number two ways people get music online, respectively. Other, legal, online music services are overshadowed by iTunes market dominance. But that is likely to change for a couple of reasons.

First, if you buy music from iTunes, you can only listen to it on your iPod — you can’t play it on any other brand of portable player. If you decide to get, say, a SanDisk Sansa instead of an iPod, you can kiss whatever you got from iTunes good-bye, unless you burn every track to a CD first, then re-rip it. Fun.

The second reason ties into the Netflix announcement. When you get right down to it, the iTunes model is a small step from the old music model. You’re buying a single. Instead of a 45 from the local record store, though, you’re buying a track from Apple. Instead of storing it on a shelf, you store it on your hard drive.

But the Netflix announcement could end the idea of “owning” a movie. Why bother, when everything is on demand? Similarly, why bother owning a song when you can listen to it any time? That’s the idea behind Real Networks’ Rhapsody service.

With Rhapsody, you don’t pay per song, you pay per month for access to the entire multimillion-song library. So you don’t own the music any more than you own a movie you watch with pay-per-view. It’s there for the asking wherever you have access to a broadband connection. (You can also buy an individual song, a la iTunes, for a buck — 89 cents for members.)

Let’s say you’re heading to the gym and want a workout mix. Instead of going through the music collection on your computer and choosing what to copy to your music player (be it iPod, Sansa, MuVo, or whatever), you choose from Rhapsody’s entire collection.

This is where things are going, for better or worse: centralized libraries for most of our content needs, personal ones for (Suzy singing at the high school musical) personal stuff.

You’ll see general libraries like iTunes and Rhapsody, and specialized ones for specific genres. And once the infrastructure is in place — ubiquitous broadband, open-source delivery software — it won’t just be commercial providers opening up their libraries. Individuals and groups will, too, whether a band, a co-op, or just a family. Or pirates; you can bet there will be servers offering unlicensed tracks as well, and precious little to stop them.

And if broadband becomes truly omnipresent, imagine the future of in-car entertainment. Instead of choosing a genre on satellite radio, you could choose the individual songs and programs you wanted via a broadband radio. Meanwhile, the kids in the back could be watching TV, or whatever movie they felt like streaming.

The best thing about all this is that it’s not in the far future. It’s around the corner. Hotspots are getting less spotty. Cities and towns are deploying broadband, and that broadband is getting faster. And wireless options are also emerging.

It may not be long before owning an album, movie, or even a book is rare, and its value is tied to its original, tangible format.